La Copa Golf League, March 16 / 2018, 11 golfers showed up to challenge the course and were met with a lot of heat, temperature wise.

the team score was a 29, keith shot the low round of the day with a 30, very nice round Keith. 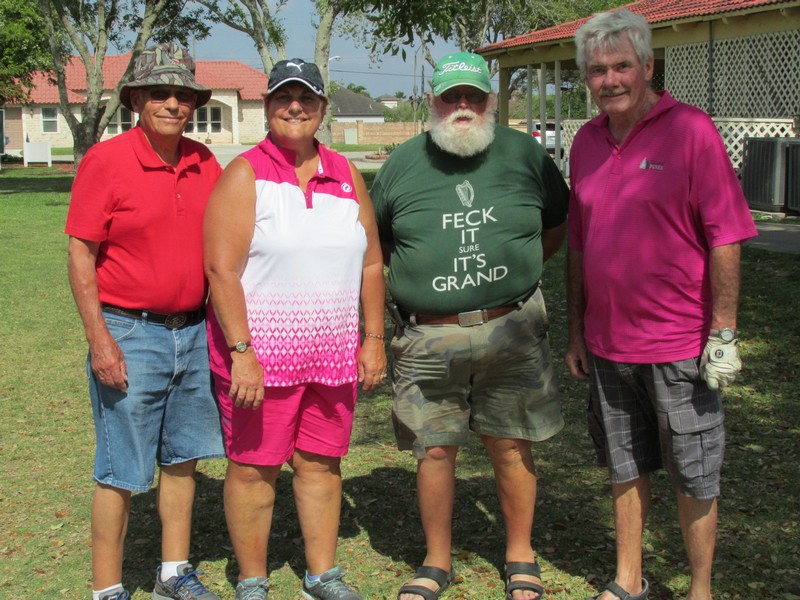 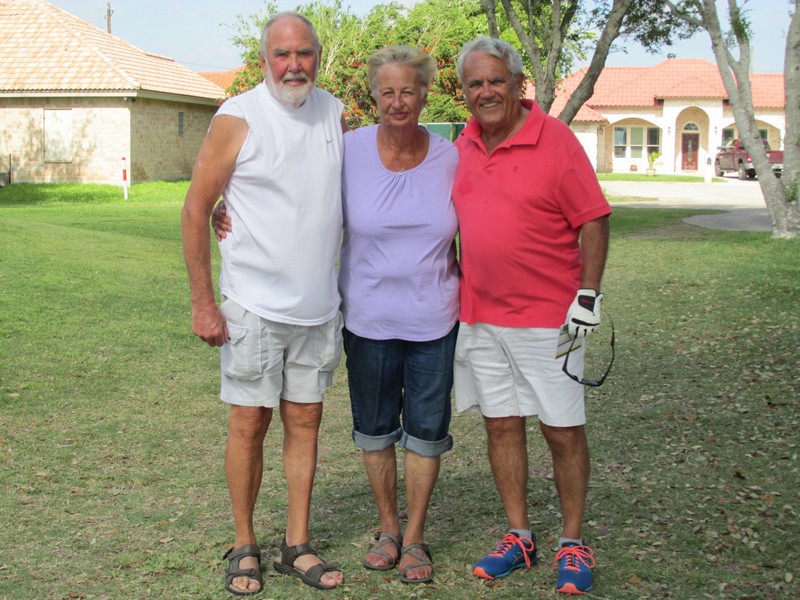 Dianna was the most consistent golfer of the day, she scored a 4 on every hole for a round of 36. No other golfer has been able to record the same score on every one of the nine holes this winter season.

The heat here is a little too much, 92 F today and with the humidity it felt like 95 F and unbearable in the sun.

Thanks to Howard for the Pictures and Gerry for sending along the Score Cards.

The day was gloomy, that did not stop 12 golfers from playing golf.

The weather this winter has been all over the map, not much rain but a succession of cold fronts coming through. it has not been cold enough to hinder the golf , but there was a few days that no one was out on the golf courses.

the red and the white teams each scored 28 to share the lowest team score for the day.

For the White team Tony and Bev Gaudagnolo each score 35’s,  Jim Williams 40, and Teresa Williams with a 36 and a team score of 28.

What a difference a week makes on the golf at cottonwood, last week the windy conditions resulted in the highest scores of the season.

This week there was just a gentle breeze, and sometimes no wind at all.  there was only 4 strokes separating the 4 teams made up of 15 players.

the format for this week was “Roll The Dice” and as always, the dice were not kind to some of the golfers and some had good luck with the rolls.

the Red team started on hole # 2 and had to have a birdie on their ninth hole (# 1) to take the weeks top spot, Jeff Miller chipped in from off the green for the birdie.  Keith Bess and Dwayne Miller were the other players on the team. there score was a 28 .

The blue team of Bev Gaudagnolo, Dan Luensmann, Jim Williams and Richard Lampi took second spot with a 29. the dice were hot and cold, Dan’s Drive on # 5 was about 5 feet from the pin but could not be used as we could not roll his number.

On # 6 they scored the only 5 recorded on the day. the dice was hot on #7 as richard put one on the green, 10″ from the cup and rolled  his own number and had an easy Birdie on the hole. Richard Drove the green to about 4 feet from the cup but the dice had cooled off and that shot could not be used, they ended up with a 4 on that hole

Tony Guadagnolo, Joyce Foy , Dianna Stewart and Teresa Williams of the Green team shot a 30 for the round and took third spot. they had 6 pars and 3 bogies for that 30.

The team of Tracy Andrews, Sandra Olson, Gerry Busch and Howard Stewart suffered from the fickle dice and Scored four Bogies and 5 pars for a total of 31.

Some of the Winter Texan’s will be headed north before next Friday’s golf. Everyone of the LaCopa group wishes them a safe journey and hope to see them again next year.

Golf on Friday feb. 23 started out with a slight breeze and the temperature at about 65 degrees and ended up at 78 degrees and the wind picking up during the round to about 30 mph, and that will test even the best golfers skills.

The wind did test the skills of the 16 golfers who turned up to play and the scores showed a higher than normal amount of strokes to get around the course.

thanks to Tracy for the two guests he brought to this weeks outing.

Paul Martin and Carl Aitken, from Southwestern Ontario,  got their first test of golfing on the narrow fairways and the Texas wind.

Carl adjusted to the wind and narrow fairways and turned in a round of 38, his first time out golfing in a few years. Paul had a bit more difficulty with the width of the fairways, as they were not quite wide enough  or long enough to contain his ball. His first round in five years was a 48.

Gerry Busch and Tony Gaudagnolo each shot 35s for the lowest rounds of the day.

Next weeks format will be ” roll the dice” which will add a bit of chance to the game.

The warm sunny weather brought out 21 golfers,  to play in the LaCopa mixed Seniors league. this is the highest total for this year. Five golfers who play each week were missing from the group and hope to be back next week.

moonbit.co.inthe Format of the day was “Roll the Dice” which is very popular with the golfers as it adds a bit of chance into the game.

The Red team of Bob and Dee Martintonni, Doug Mazur and Bill Kozak, scored the only birdie of the day, on the first hole and were off to the races, they scored a 28 in the day to take first place on the days golf.

Dwayne Miller, Tracy Andrews, Nancy Rhulow and Gerry Busch made up the Blue team and took second with a 30.

Coming in the middle of the pack with a 34’s were the White team of Tony Gaudagnolo, Bill Stewart, Dave Miller (a new golfer this week) And Keith Bess.

The Pink fivesome  of Dianna Stewart, Bev Gaudagnolo, Merv Andrews, Richard Lampi and the cart operator Joyce Foy also shot a 34, with a bit of help from the dice throwers.

The Green team, Jo LaCore with her better half, Harry, Howard Stewart and Gary Andrews, had no luck with the dice and turned in a 37.

Next week will be individual scoring,  the best score on each hole will be recorded for overall bragging rights.

ever thought about Bitcoin?

The LaCopa league tees of on Friday’s each week at 10 AM , and is open to senior golfers from various parks in and around Harlingen, Texas.

The highlights of the days golf:

Bob Martintonni shot a 28 for the best individual round of the day.

The Blue and the Pink teams, both turned in rounds of 28 and shared the top spot for the week. Bev, Bill, Howard and Harry played for the blue team while Bob, Dee and Richard made up the Pink team.

Tony, Gerry and Dan played for the White team and scored a 29 for the day.

The Green team turned in a team score of 32, Dwayne, Jo, Dianna and Joyce made up this team.

Doug, Nancy, Becky and Tracy formed the Red team, (this was Tracy’s first round of golf since last winter)  They scored a 33 for the day.

If you like some trivia for the day, it took 18 golfer 650 strokes to get around the course.

On a sad note, Don Riesberg a long time LaCopa Group golfer,  lost his battle with cancer on Wednesday Feb. 7th.  His down to earth outlook on life and his quick humor sure is missed around here.

Friday Mixed Golf for the LaCopa League was Wild and entertaining, with the PINK TEAM  leading the field ( can you imagine this, JoyceFoy driving the cart, Dianna Stewart giving her directions on where to drive and Harry (la Core) hanging on  the side of the cart for dear life), as they sped around the golf course recording 8 pars and only one Bogie for a 28 on the round.

They have the bragging rights for the week.

19 player took part in the chase for the top spot.

The foursome of Dee Martintonni, Howard Stewart, Dwayne Miller and Nancy Rhulow, Shot a 30 and took second place for the White team.  Dee Martintonni had the best round of the day scoring 6 pars and 3 bogies for a round of 30.

The RED TEAM also scored a 30 but lost second place on a count back. Keith Bess, Gerry Busch , Chuck  Force ( new golfer this year) and Doug Mazur. made up this team this week.

The BLUE TEAM of Becky Lunesmann., Jo LaCore , Tony Gaudagnolo. and Richard Lampi somehow managed to stay out of last place with a 32.

The GREEN TEAM Scored a 33 . This male dominated team,  of Dan Lueesmann, Bob Martintonni, and Bill Stewart. and Bev Gaudagnolo. took 159 strokes to complete the round, Bev G. shot a 40 and she did not have the highest score on this team

Roll the Dice was the format of week 3, for the LaCopa Inn League, (Week two was rained out).

While the bulk of the Golfers in this league stay at the LaCopa Inn on Tyler Ave, there are other golfers from other Winter Texan parks who play with the league every Friday morning at the cottonwood golf Course on Ed Cary Drive.

Tee time is at 10 A M every Friday,  untill the end of March when most of the Winter Texas head north to the colder climate.

20 golfers took part in the golf today with nice weather.

Roll the dice : Each player is assigned a number from the dice, then tees off , after the tee off the dice is rolled to see  which ball will be used.  this is done on every hole. From that point on it is scramble golf, ( best ball) with each player hitting the ball from that point. 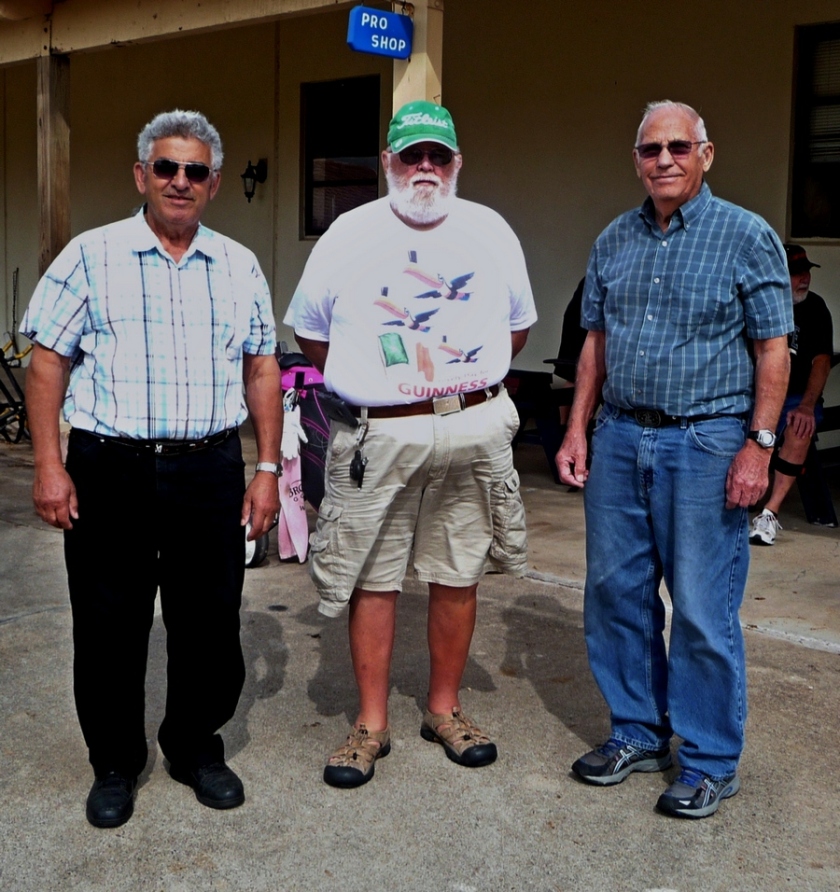 The white team (Dee, Dwayne, tony and Keith) led  the charge around the golf course, turning in a blistering 28 for their round ( they must have had better luck with the dice) than the  Blue Team  of Bob M, Dan L, Jim W, and Gerry B.  Their score was a 36, good for fifth Place. 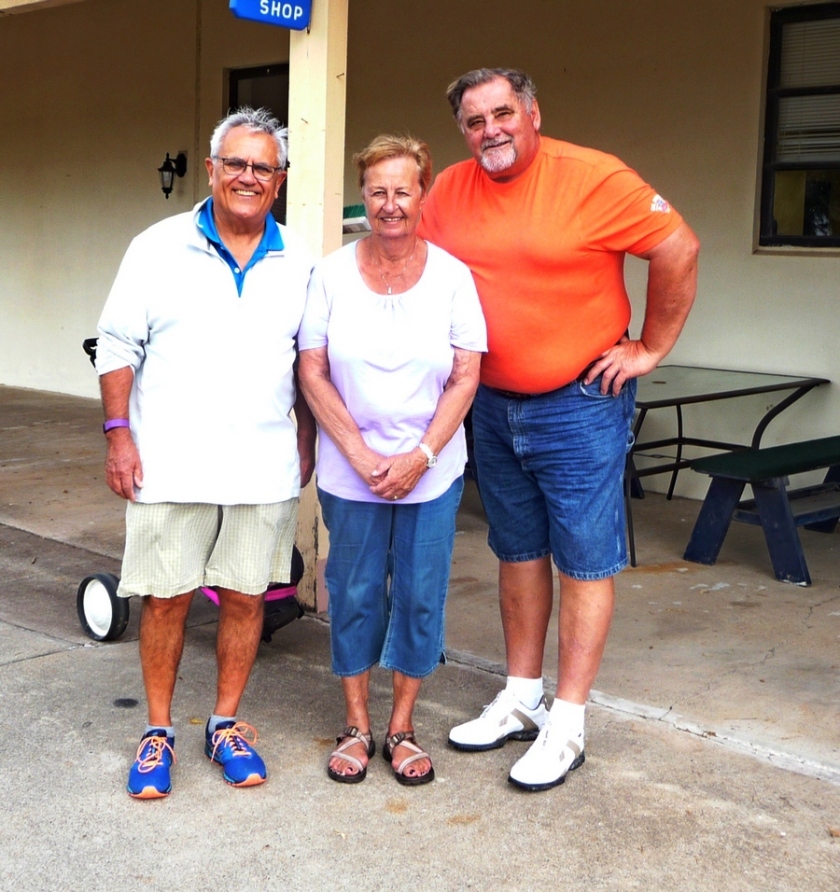 In not quite last place were the Pink Team with a 34 on the day. Teresa W. , Howard S., Bev G. and Richard L, made up this fine team.

The only Birdie of the day went to Becky, Nancy, Harry and Doug, from the Red team.

It was breezy on the course. Bob and his wife Dee are missing from the pictures as they had to leave to play at Treasure Hills golf club. 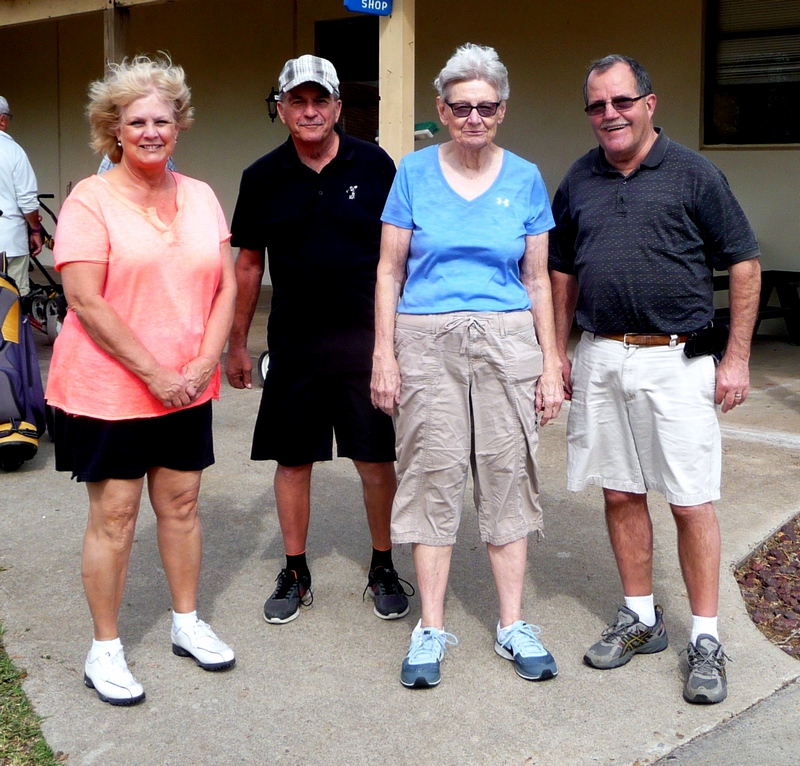 The cold weather left the Rio Grande valley and the golfers came out of hiding to play a round or two.

Doug Mazur shown in the picture is hitting his second shot on hole # 9 ,  Keith Bess is sitting in the cart.

The picture was taken from about 80 yards away with a  cell phone.

The sun was out and a breeze from the north made it a chilly start to the season. A couple of the regular golfers from Winnipeg opted to stay in their warm room,  also two from Iowa who stayed home as well.

Bragging rights for the day when to the blue team of Joyce Foy, Doug Mazur,Bev Guadagnolo, Richard Lampi and Dianna Stewart, they turned in a best score of 30, thanks to Joyce’s solid play.

Second place went to the Red team of Duane Miller, Jim Williams, Keith Bess and Harry LaCore who turned in a 31.  Harry recorded a Birdie on # 2.

Third place was claimed by the foursome of Jo LaCore, Teresa Williams, Howard Stewart and Tony Guadagnolo with a steady 32.  Jo scored a birdie on # nine when she chipped in  from off the green.